Sep 9, 2012
Happened to come across some more images of Indian Army undertaking canal crossing operations. These are also from various exercises conducted by the IA over last couple of years.
1. T-72 entering the bridge over a canal. 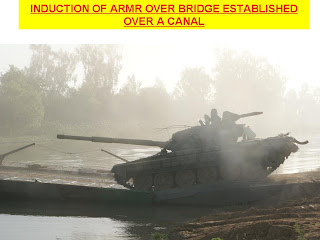 2. BMP-2 crossing  the bridge over a canal. You can see the pontoon bridge has been tethered to the home and far bank of the canal. In case of a bigger water body, they would have required the use of the boats which form part of the whole PMS Pontoon Bridge System. The pic above and below are from exercise Hind Shakti-2009. 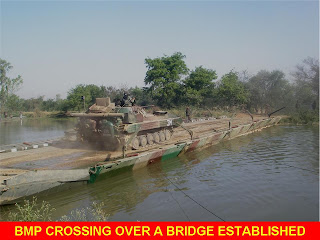 3. BMP-2 crossing the canal. The water body in the image looks similar into which BMP-2 can be seen entering in the first image of original photo-essay on canal crossing operations. 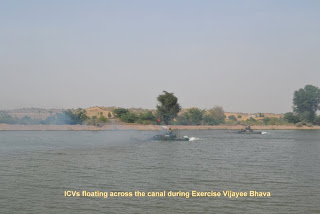 4. Infantry/Engineers waiting to cross over to the far bank of the canal. One can clearly see the raft. The tank will provide the fire-cover. I once remember seeing a video of IA on YouTube which showed a small body of engineers crossing over, followed by BMP-2 on their power and some T-72 tanks snorkeling over to the far bank. This seems to be a standard SOP to secure a lodgement across a water obstacle. 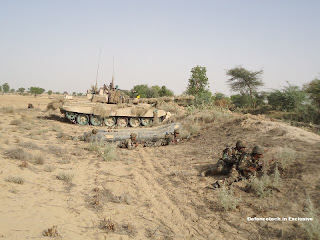 5. A small image which shows the process of crossing over being set in motion. The raft is being prepared for launching and smoke grenades have been fired to cover the crossing over. 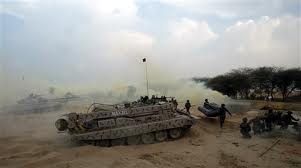 6. A T-72 tank fording across a water obstacle during Exercise Vijay Bhava and Ashwamedha, respectively. You can see mine ploug (which I think are KMT-6 mine ploug) attached in the front of the tank in the top.
A T-72 can ford water obstacles with depth up to1.2 meters. Snorkeling is used in case of water bodies with more depth. 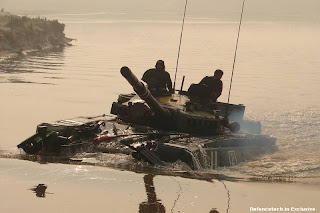 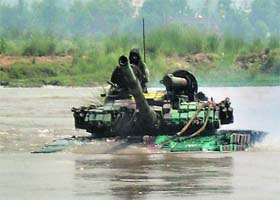 Source: Tribune
7. Troops (seem like infantry, could be engineers too) crossing over a water body during exercise Pine Prahaar. 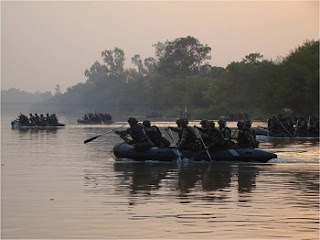 8. Troops can be seen carrying raft for water crossing. You can see two soldiers carrying Carl-Gustav 84mm RL on them 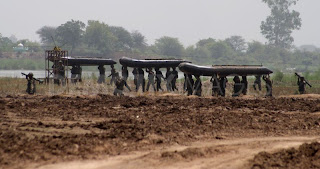 9. A rare image of Arjun Tank demonstrating its fording capability. 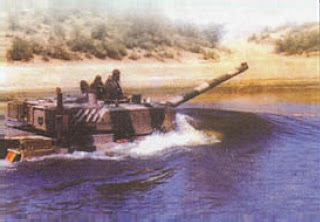 10. A T-72 Tank demonstrating its fording capability in what looks like a water body used for training in such activities.

Added later: One can see the cylindrical tube to the left of the commander; this is the snorkeling tube

From Wikipedia on T-72 snorkeling:

“The T-72 is designed to cross rivers up to 5 m (16.4 ft) deep submerged using a small diameter snorkel assembled on-site. The crew is individually supplied with a simple re-breather chest-pack apparatus for emergency situations. If the engine stops underwater, it must be restarted within six seconds, or the T-72’s engine compartment becomes flooded due to pressure loss. The snorkeling procedure is considered dangerous but is important for maintaining operational mobility“ 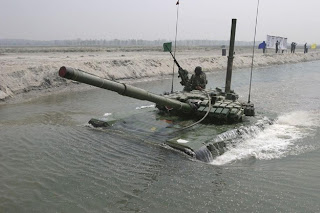 Restructuring the Indian Army – Taking the War into Tibet?

Dolam Stand-Off: Where do we stand?