Aug 2, 2012
My assessment of Chinese options in the Sikkim-Tibet(Chumbi Valley)-Western Bhutan Corridor.
While everyone seems to be harping on the Indian position and options vis-à-vis the Chinese, what no one comments on is the Chinese position and options in the area. Geography is a double edged sword and its effects Chinese as much as it does Indians. In my opinion, the Chinese are at a back foot when it comes to options across the Chumbi Valley area. And they might just have to go on offensive to pre-empt this area being pinched off from the Tibetan plateau. Here is my take on the situation.
(a) Geography – As always, first things first. Let us look at the geography. On the Chinese side, there are two roads which lead to the Chumbi Valley from Tibetan Plateau – one is S204 and another one which runs parallel to Tibet-Bhutan boundary – there seem to some radar + communication sites along this road. They both converge at the Chumbi Valley and from one road goes south (to the base of Nathu La on Tibet side) and another feeder road moves north along the Sikkim-Tibet border. The moment these two main roads leave the Tibetan Plateau, they move along narrow valleys with very high (and steep) surrounding mountain ridges.
This is an important aspect – because what people describe as ‘wedge’ aimed at Siliguri corridor also resembles a funnel – with the broad base of the funnel towards Tibet and narrower part comprising of Chumbi Valley towards India.
What this means is that while the ‘broad’ top area may allow you to park troops/assets in large numbers, the narrower bottom part can accommodate only that many troops. There is simply no real estate here – as the map shows, the PLA Garrison HQ in Chumbi Valley is placed in an area which is hardly 500 meters wide. This place will be a chock-a-block with men and material once the shooting match starts. And which will represent extremely vulnerable targets to IAF and Indian Artillery.
And it will have to content with the famous dictum of requiring 9:1 (minimum) ratio in terms of attackers to defender. But where will it park such a large force.
Maps for reference: 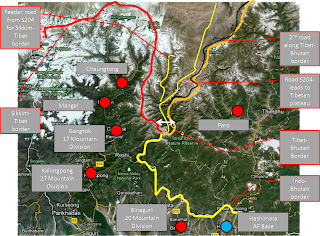 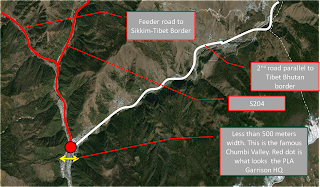 (b)PLA Options – More than anything else, PLA will be forced from day one to draw IA in areas towards central part of Sikkim and North/North-Eastern part. They will simultaneously try to put pressure across Nathu La. As I explained earlier, Indian garrisons in central and north/north-east Sikkim (more in case of the latter) are likely to fight and operate as standalone sectors due to connectivity issue – which will come under intense pressure once the balloon goes up.
While the western arm of North Sikkim Highway is much better protected (there being multiple north-south ridges between border and this road), PLA will try and isolate these areas by striking at (or trying to strike at) Cheungtong itself. They would want IA to be on defensive from word go. Their game plan could be to pinch the areas north of central Sikkim. With there being only two main roads in the area, if the PLA occupies the critical node(s), rest of the areas to north can be isolated. The IA garrison in North/North-East (and also south) would face PLA threat from rear itself.
However, this limited option in terms of number of roads available due to geography also means that should the PLA manage to secure the nodes, their movement in northern or southern directions will be through known areas – areas which can be defended. PLA will face the same issues which IA will if some day it decides to go west from Ladakh along the Indus or Shyok river. The defender can control the high ground, sabotage the road and bring every inch of the road under observation and fire. A road blockage here can hold up traffic and movement for days.
I personally don’t buy the argument of PLA threatening the Siliguri Corridor by moving down the Teesta river valley from Nathu La – IA has blocked that access, sure and proper. In my opinion, the real threat to Siliguri Corridor and adjoining areas comes from PLA deciding to enter India through Bhutan. If one observes Google Earth, one can see feeder roads leading from Tibet to Bhutan-Tibet border. PLA could come down western Bhutan using the existing road infra inside Bhutan, enter India and then turn west.
But – it all the above seems improbable to me because of that one single factor – where from will PLA sustain such an offensive? Where will it form the firm base for offensive formations? Where will the POL and ammunition and other logistic dumps be created? The entire PLA lines of communication will be exposed to IAF. And IA can threaten the flanks of these lines of communication and cut-off the forward elements from their rear base.
You can appreciate the placement of mountain divisions under 33 Corps in the sector in the above context. 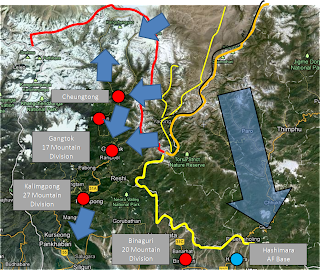