In this section of analysis about Canal based defenses in Pakistan, we look at the general area of Rahim Yar Khan (RYK) city. RYK is also the southernmost district in Pakistan Punjab and lies opposite Jaisalmer District in the Indian state of Rajasthan. RYK City is the largest city in the district of RYK and an important commercial center. We will be looking at the general area RYK and Sadiqabad.

As introduced earlier, the city of RYK is an important commercial center in South Punjab. Apart from that, the major north-south communication axis of Pakistan, National Highway-05, which connects the port city of Karachi with important cities like Lahore and Rawalpindi in Punjab runs at less than 10kms towards west of the city. Capture of this town would represent a major psychological defeat for Pakistan and would literally mean splitting Pakistan into two by severing the north-south link. 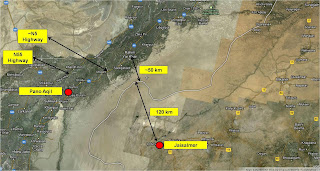 What makes RYK a still more attractive option is the distance of the city from India—Pakistan border – the city lies at a distance of <50kms from border and <200kms from Jaisalmer, as the crow flies. A dash from Indian side can be made to RYK – any Indian success here can threaten the flanks and rear of Pakistan defenses in the Fort Abbas-Bahawalpur area while creating headache for defenders of southern Sindh. India will have prime strategic land available to barter at the negotiation table. 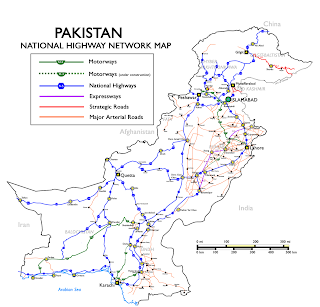 At a strategic level, from Pakistan Army’s perspective, loss of N5 would represent major loss of north-south communication axis and cut-off its forces in Punjab from those in Sindh. This would diminish the chances of sending reinforcement from 2 Corps/31 Corps combine to V Corps. V Corps for all practical purposes would be left alone. For example, in 1971 war, after the reversal of PA’s 18 Division at Longewala and when Indian 11 Division made advance towards Naya Chor in Sindh, Pakistan Army sent 33 Division (then under II Corps) to reinforce the sector. Such north-south movements would become difficult.

It was exactly to pre-empt any such development that Pakistan built National Hgihway-55 or, the Indus Highway. N55 runs to west of the mighty River Indus – thus, giving it more depth and protection from any Indian advance in the area. It was meant to ensure that in case of any Indian interdiction of N5, N55 will serve as the back-up and ensure that the north-south link is not severed.

However, while the above may well be true, N5 remains the lifeline of Pakistan. One simply cannot overlook the fact that it passes through some of the most important towns and cities of Pakistan. As per a 2005 Asian Development Bank Report on National Highways in Pakistan (concerning loans to Pakistan), had this to say about the volume of traffic on N5:

“Traffic using the national highway network, comprising about 8,320 km of national highways and 710 km of motorways, is largely commercial: 75–80% of traffic. The main domestic artery is concentrated along the 1,760 km Karachi–Lahore–Peshawar (M9/N5) corridor. This serves 80% of the urban population and carries over 55% of intercity traffic. The corridor also links Punjab and the northern parts of the country with international markets through the southern Karachi area ports, which account for 96% of all trade. About 60% of the port traffic moves along this corridor. Other national highways include N55 (Indus Highway), N25, N65, N40, N70, and N35 (Karakoram Highway)”.

On top of that, we have the minor issue of bridges on the River Indus – most of the PA formations are in cantonment to east of Indus. Exception being the formations under XI and XII Corps in Peshawar and Quetta. In case of interdiction of N5, Pakistan Army formations will have to cross the Indus at these points – and from Multan in north to Hyderabad in south, there are grand total of four such locations. The time required for using these routes to shift troops would not be consistent with the urgency which PA may face with.

A detailed assessment of this aspect was provided in the previous blog post along with the situation as was obtained in Mid-2002. To sum up the key points:

Map of road network in Jaisalmer and Bikaner district which shows presence of road network till border with Pakistan. This allows India to move formations that much closer to border. 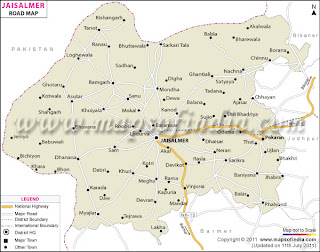 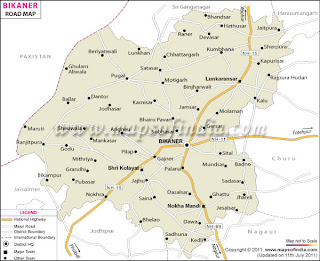 Unlike other areas, the water obstacle in this sector consists of two inter-related systems – one, the usual canal system and other, a system of evaporation ponds.  Both of them are explained in detail below.

The canal system in the study area is fed by Punjnad Barrage on River Chenab. From this barrage, two main canals off take water – (a) Punjnad Canal (b) Abbassia Canal. The Punjnad Canal runs towards west of Abbassia Canal and the main body of this canal lies between River Indus and National Highway 5 (N5). From the perspective of this study, Punjnad Canal is of no interest. Abbassia Canal on the other hand takes a more easterly course and the main canal and its major/minor channels lie between Indian border and town of RYK.

Schematic diagram of the Punjnad Barrage and course of its major canals is given below: 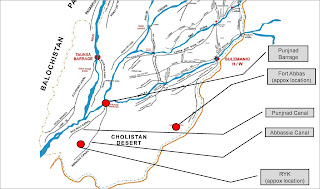 Satellite image and route of Abbassia Canal and its major/minor channels is given below: 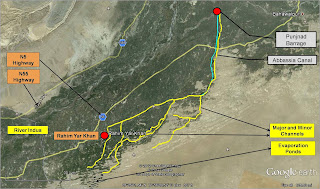 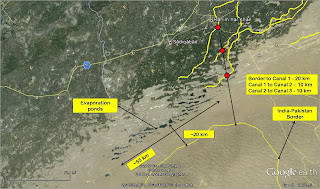 As can be seen from the image above, the city of RYK lies behind a ring of canals.The image also shows the evaporation ponds, which will be explained subsequently.

Any Indian advance on this axis will face these water obstacles. The obstacles have the potential to force the Indian columns to advance along a narrow and predictable axis…any such development will allow PA fight behind prepared defenses with relatively far lesser number of troops than would be required otherwise.

Indian Army would not want to fight in a narrow corridor where it cannot bring the maneuver element of  its mechanized into play. Also, it would ideally want enough real estate to commit and create disproportionate force levels against the defenders to overwhelm them in shortest time possible. It would not want to suffer a Thermopylae moment where a lesser force holds out against a larger one because the larger force could not commit its forces/

Such defenses can also impede the advance thus giving PA enough time to hold out against superior Indian forces and allow international geo-political pressure to call for a ceasefire.

In terms of width, the width of the canals at which markers in the above image are placed are ~ 20 meters, 5 meters and 25 meters. The width of the canals is not constant across their entire stretch but fall with in a particular range. Given the spatial distance between the canals, I have not been able to show them in a single image.

Ever since I started researching the topic of canals in Pakistan, these water structures came across as a puzzle. They are in the middle of a desert and had to be man made. But why would anyone do something of this sort?

Well, the answer is that these ponds are called as Evaporation Ponds and were built as part of Salinity Control and Reclamation Project (SCARP). There have been many such SCARPs in Pakistan and one in question were built under SCARP-VI.

Basically, what happened is this – once the mass irrigation was introduced in the area, the water table started to rise. This was on account of water seepage from the canals as well as blocking of path of natural surface drains due to construction of dykes and canals across the path of such natural drains. In addition to this, there was an issue of rising salinity of ground water…both these effects combine together led to agricultural areas becoming unsuitable for cultivation. Therefore, projects were launched to develop a drainage system which takes water away from the fields as well as sub-surface level into evaporation ponds from where it is lost to the nature.

Here is a more technical explanation:

“Disposal of drainage effluent, especially when it is saline, has always been a problem. In the FESS Project,surface and sub-surface drainage effluent is being disposed of by gravity through outfall surface drains into evaporation ponds. The evaporation ponds are a series of inter dunal depressions locally known as `Tobas’ located in the south of the Haroonabad. These ponds are located in Cholistan situated along the fringe of

Bahawalnager and Bahawalpur districts. In these ponds, drainage effluent is evaporated at high temperatures and percolates into the groundwater underneath. The area is agriculturally unproductive as the valley floors are highly sodic, consist of sandy and silty clays and do not support any vegetation.”

So, these ponds are fed by canals which drain water from the agricultural areas. While the initial objective was agricultural in nature, I think their placement on Indo-Pakistan border gives them defensive value as well.

Here is a closer look at these ponds. 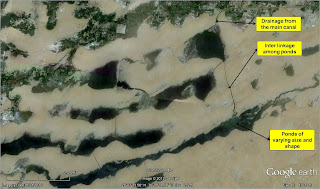 There is an additional possibility of the walls of these ponds being breached or, additional water pumped through canals to cause overflow and general flooding in the area. The sand may become unsuitable for large scale movement of tracked as well as wheeled vehicles.

Like other areas, Pakistan has built formidable defensive structures which will test the resolve and resourcefulness of Indian offensive formations. IA will need good engineering support as well as air-cover as it dashes across the Thar towards its objectives.