Bambanwala Ravi Bedian Link Canal (BRB Canal), better known as Ichhogil Canal, is synonymous with the 1965 Indo-Pak war and Lahore sector of the war. This canal ran 8 km inside Pakistan and proved to be a formidable defensive structure. The home bank of the canal (on the Lahore side) was lined with concrete pill-boxes with over-lapping arcs of fire.

From an army’s stand-point, defensive structures like water canals offer two important advantages – (a) economy of forces (b) delaying the advance of the enemy and limiting his ability to maneuver

In case (a), home bank of the canal can be lined with fortified and concrete defensive positions in a mutually supporting manner. Given the protection offered by these structures, the manpower required is relatively less as compared to say, defending over an open ground. The manpower and other assets like tanks/mechanized infantry can be reserved for counter-attacks on the enemy using these canal based defenses as firm base. 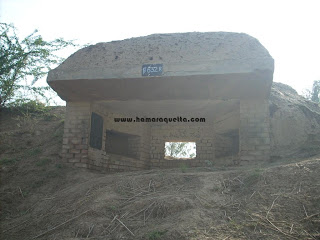 Pakistan inherited an extensive canal infrastructure in Punjab on independence with most of it concentrated in Pakistan Punjab.

In case of Pakistan, the canal based defenses allow it many advantages. The same are mentioned below:

(a) Protection of vital economic centers – all the economic centers are situated to west of these canals. Lahore is the prime example of the same. Therefore, perforce, any direct assault will require substantial manpower and engineering effort from India’s Strike formations.
Given the lack of geographical depth, these canal based defenses allow it fight the battle as far away as possible from the centers of political or military gravity.

(b) Coupled with the implicit understanding that world powers will not allow a war to continue beyond a 10-15 day period, such time consuming options are automatically ruled out.

(c) In addition to the above, all the major road networks run to west of these canals thus, affording them depth and protection from interdiction by Indian forces.

(d) Conservation of forces – these defenses allows Pakistan Army to use the minimum number of troops and other assets for defending the home bank. In case, a critical situation evolves in any of the sectors, Pakistan Army (Pakistan Army) can move forces to reinforce such an area using the lateral lines of communication situated west of these canals.

(e) The presence of these defensive canals when coupled with the level of urbanization in Pakistan Punjab also means that mass scale deployment and maneuver warfare may well be a distinct possibility.

The irrigation system consists of water reservoirs (03), barrages or headworks (18), major canals(45) and their distributaries and 12 inter-link canals (which connect rivers – like Ichhogil Canal)

A headwork is situated on a river and it is used to divert and control the flow of water into canals.

Here is a definition of a headwork: “Any hydraulic structure which supplies water to the off taking canal. Diversion head-work provides an obstruction across a river, so that the water level is raised and water is diverted to the channel at required level. The increase water level helps the flow of water by gravity and results in increasing the commanded area and reducing the water fluctuations in the river” (source: http://www.aboutcivil.org/headworks-types-&-locations.html)

A river has multiple headworks at various places on the river to serve a particular area. 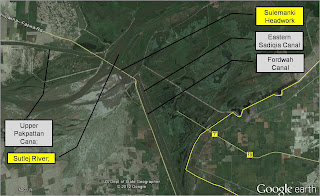 The Canal network has its own hierarchy which is as follows –

Most of the area in Pakistan Punjab opposite Indian state of Punjab is densely populated with various urban centers and with a complex network of canals. Any large scale maneuver warfare involving large mechanized formations is generally ruled out in this area.

That does not mean there would not be any offensive action undertaken in these areas. In my opinion, the offensives in these areas will be broadly of these types – (a) in areas which are vulnerable to PA assault, offensive would be undertaken to put Pakistan Army on back foot. This will automatically provide defense to these areas (b) Assaults to threaten or capture important nodes to keep Pakistan Army under pressure, exploit success in these assaults (outflank the enemy advance, capture headworks  and restrict movement of enemy forces from these sector to other sectors (c) capture as much vital territory as possible for discussion on the bargaining table (d) threaten the flank of enemy forces in adjoining areas of operations and create possibility of outflanking and enveloping them.

The big challenge in fighting in these areas from India’s perspective is that as we advance further, the more urban the landscape becomes. Also, the defenses become more compact with attendant challenges.

The real hammer is likely to fall in the desert – areas in south Pakistan Punjab and Sindh. The area is far less developed and offers scope for deployment of large mechanized formations. It is not a coincidence that the Area of Responsibility (AOR) of Indian Southern and South-Western Command straddles area between North Rajasthan and Gujarat. And that both these Commands each have a mechanized heavy Strike Corps in their ORBAT (21 Corps and 1 Corps, respectively).

Therefore, this paper studies the status of water/canal system in south Pakistan Punjab (Fort-Abbas) to areas opposite Barmer Sector in India.

The map of study area is as follows: 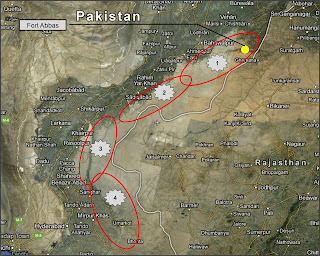 The origin of the canal network in the Sector 1 (S1) is at Sulemanki Headwork on river Sutlej, opposite Indian Fazilka Sector. From the left bank of Sulemanki Headwork originate two major canals namely Fordwah Canal and Eastern Sadiqia Canal. Both these canal move in south-western direction and while the Fordwah Canal moves deeper into Pakistan Punjab, the Eastern Sadiqia Canal covers the areas on the Indo-Pakistan border.

After traveling 74kms from the Sulemanki Headwork, this canal trifurcates into Hakra and Malik branches and Sirajwah Distributary. The schematic layout of this system is given the map below. 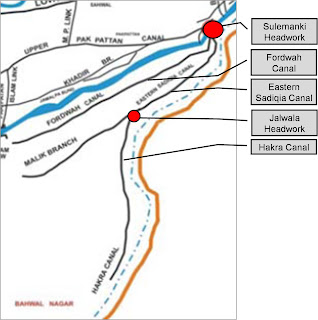 The Hakra Canal further travels from Jalwala Headworks up till a point near Gulab Ali and bifurcates into Hakra Left and Hakra Right Distributary. During its travel from Jalwala Headworks, many distributaries and minor canals off take water towards east and west of canal. These off take channels create a further mesh of smaller canals in north-south direction which adds depth to the existing obstacle presented by the main canal.

The subsequent map shows the alignment of Hakra Canal and its two main distributaries. As can be seen in the picture, the canal runs parallel to the India-Pakistan border and is situated at a depth of 2-6 km from the border. 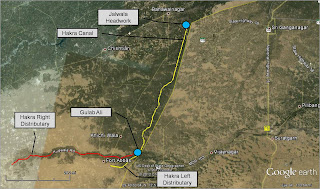 Close up image of off-take channels at a particular point 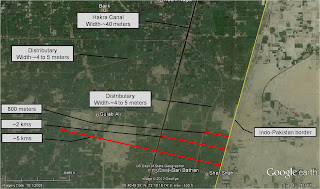 Complete network of off take channels 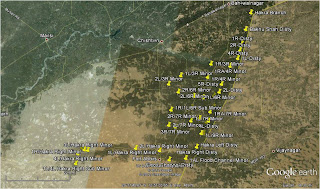 The city of Fort Abbas is situated at a distance of ~18km from the Indian border, opposite Indian town of Anupgarh. Any Indian success in the Fort Abbas area would not only mean a big psychological impact but also have military ramifications. Indian forces can move either north or south threatening the flanks of Pakistan Army in these areas and isolating them from their rear. PA elements opposite Indian Sri Ganganagar and Abohar could find themselves facing Indian offensive from east as well as south.

The canal network between Fort Abbas and Indian border consists of the Left Distributary of the Hakra Canal. Further on, this canal bifurcates into smaller channels known as flood minors.

While Hakra Left Distributary is between 10-12 meters in width, the smaller flood canals are between 2 to 8 meters in width. The picture below gives the outlay of the canal system in the general area of Fort Abbas.

Northern flank of Fort Abbas town is covered by the Hakra Right Distributary which is 30+ meters in width.

Straight Indian advance towards Fort Abbas can be checked by flooding the area between Indian border and Hakra Left Distributary and by manning the defenses on western bank of this canal. Crossing north of the point where Hakra Canal bifurcates means any approach towards Fort Abbas will involve either capture of bridge over Hakra North Distributary or crossing of the same. Other option could be to bypass the canal network towards south and then moving in north-westerly direction. But, one can be sure that Pakistan Army will build these permutations and combinations into their defensive set-up. 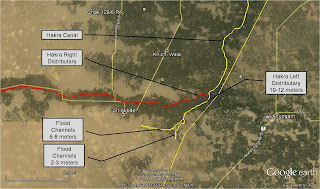 Study of other sectors will follow in subsequent ports.