A brief overview of the Indian Army set-up in the North East.

The entire area comes under Eastern Command based out of Kolkata. It has three Corps under it. The same are as follows:

This is how the situation is stacked up

– 2 new Mountain Divisions have been raised in the north east.

– 3 Corps had only one division (57 MD – Leimakhong). 8 Mountain Division was once part of 3 Corps but moved to Srinagar in 90s because of insurgency and today guards the Kargil sector (as part of 14 Corps in Leh).

– So, what IA has now done is raise two new mountain divisions in the area (56 MD in Zakhama, Nagaland and 71 MD in Misamari, Assam)

– 2 MD, which is based in upper Assam (Dinjan – it is before Tinsukhia) has been transferred to 3 Corps. So, along with 57 MD (Leimakhong in Nagaland) and 56 MD, 3 Corps now has three mountain divisions to man the eastern AP. The Area of Responsibility (AOR) has been rationalized this way between 4 Corps and 3 Corps. Earlier, 4 Corps was literally responsible for the entire AP border.

– The biggest problem we have is that because of geography (and political negligence), our road network is like ribs of a Japanese fan. They radiate outwards from a central location but there is no lateral (east-west) connectivity – which means that shifting of formations from one sector to another is near impossible. And which further means that each sector needs to be staffed and treated as stand alone entity – which means over compensation in terms of troops and other assets.

– China that ways has one big advantage – it has a river valley running parallel to the AP-Tibet border (depth of >30kms) and it has built a road S306 in this river valley. What this means is that PLA can move troops from Tibetan Plateau to sectors opposite AP and given the lateral connectivity, shift forces and apply pressure where it deems feasible. The depth of the road (with high and parallel ridges in between) means that it is out of Indian interdiction.

Please see the image below – the airplane symbol is Mechuka ALG and you can see how lateral (east-west) movement between sectors on Indian side is restricted due to ridges running in north-south direction. On our side, the valleys are narrow and very steep. The dense vegetation is an added obstacle. 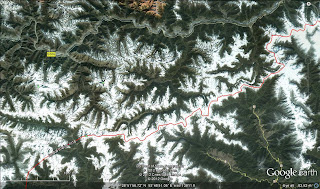