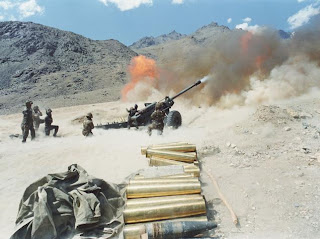 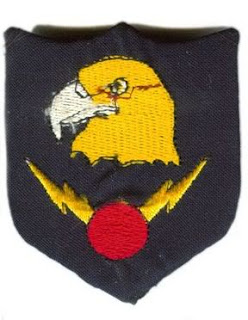 While researching on the topic of artillery divisions, I came across information which gives some insight into the composition of 41 Artillery Division. I will be using the same as template for illustrating the current topic. I am assuming that other artillery divisions would also broadly follow the same pattern – save for modifications to cater for specific tasks.
In the last post on artillery division, I had surmised that the division consists of mix of Tube Artillery, Rocket Artillery and Missile Regiments – with Tube Artillery being the largest component.  Therefore, it is expected that the division will have separate brigade(s) which will hold Tube Artillery, Rocket Regiment and Missile Regiment.

Origin –
Artillery Regiments in the Indian Army are grouped into artillery brigade(s) and each Infantry/Armored Division has an organic artillery brigade. Each Corps also has an artillery brigade directly under its command and this is referred to as Corps Artillery Brigade. Independent Armored and Infantry Brigades have 1 x Artillery Regiment organic to their ORBAT.
Apart from these artillery brigades, Indian Army also had (has?) some Independent Artillery Brigades. These (I) Arty Bdes were directly under each Command HQ and were moved within the Command as per the requirement. Based on what I’ve read, I’m of the opinion that some of these (I) Arty Bdes were used as nucleus for the Arty Divisions.
Also, the Corps Arty Bde of the Strike Corps (under which each of the Arty Division falls) was also used for beefing up these formations. While I had assumed this to be the case, it was recently confirmed by Lt. General Panag (retd.) in one of his tweets related to a discussion on Arty Divisions.
In case of 41 Arty Division, 97 (I) Arty Bde formed the nucleus of the Division when it was raised in 2002. Please see the excerpt below from Sainik Samachar: 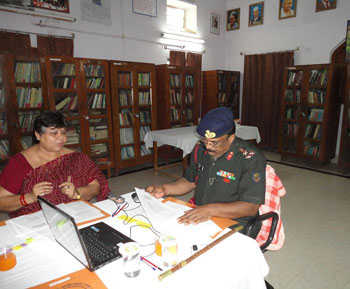 The Rocket Regiments of the division comprising of Pinaka, Smerch and BM-21 GRAD systems are most likely being held by this brigade.
SATA Regiment
While trying to assess the equipment profile of an artillery division, I had surmised that for a formation of its size and role envisaged it makes sense for it to have a full-fledged SATA Regiment (Surveillance and Target Acquisition). Well, it seems that this is the case.
Please see this excerpt from Sainik Samachar:

Source: http://sainiksamachar.nic.in/englisharchives/2008/oct15-08/h19.html
In terms of equipment profile, the SATA Regiment is most likely to be equipped with a flight of Searcher UAV and ANTPQ-37 Weapon Locating Radars. The UAV will allow the Division to undertake surveillance and recce capability in depth – something required to do justice to the awesome amount and quality of firepower it carries.
ORBAT Summary
Based on the above assessment, the ORBAT of an artillery division can be summarized as below:
2 x Gun Brigades (97 and 98 Artillery Brigade) – These are likely to hold between 3-4 medium regiments per brigade giving 6-8 medium regiments in total. At 18 guns per regiment, we’re looking at ability to field between 108 – 144 medium guns.
Presently bulk of the guns are likely to be 130mm M-46 with sprinkling of 155/39 Cal FH7B02 Bofors. However, in due course of time, once the FRAP sees light of the day, the caliber will be standardized at 155/52 Cal with induction of new guns. Another important aspect is the mobility – at present, all these guns are of the towed variety. If the division has to keep pace with its parent Strike Corps, it will need mounted or Self-Propelled guns (tracked or wheeled) in its inventory. However, given the limited number of SP (Tracked) guns being ordered (180, I think), the divisions are likely to be equipped with a mix of towed and mounted guns.
1 x Rocket Brigade (374 Composite Artillery Brigade) – The divisions have one Rocket Brigade in their inventory.   This brigade at present is likely to be holding 1 x Smerch Rocket Regiment, 1 x Pinaka Rocket Regiment and 1 x BM-21 Rocket Regiment.
However, these are early days for the Rocket Regiments in the Indian Army. In my opinion, when more Pinaka Regiments are available along with its long range version (120kms), the Brigade is likely to have the following composition:
2 x Long Range Rocket Regiments – Smerch/Pinaka-LR
3 x Medium Range Rocket Regiments – Pinaka
1 x Missile Brigade – In my last post, I had surmised that it is likely that each division is holding 1 x Brahmos Missile Regiment. However, I have not come across any reference to separate Missile Brigade with 41 Artillery Division – or any other artillery division for that matter. Therefore, the Brahmos Missile Regiment is either under one of gun/rocket brigades or reports directly to the Artillery Division HQ.
But in my opinion, the artillery division will require a separate Missile Brigade to hold the Brahmos Regiment as well as Prahaar Missile equipped regiments (when they enter service). Brahmos is an expensive missile and Army needs a Tactical Battlefield Missile (TBM) to fill the gap between Rocket Artillery and high-end but expensive Brahmos.
In future, the Missile Brigade is likely to have following composition –
1 x Brahmos Missile Regiment
2 x Prahaar/TBM Regiments
Conclusion
To quickly summarize the above, the ORBAT of an artillery division looks something like below:
2 x Gun Brigades
1 x Rocket Brigade
1 x Missile Brigade
1 x SATA Regiment
Other components of the divisions are going to be support units such as ASC, EME, Ordnance, Field Ambulance etc.

With this post, I concludes the series on Artillery Divisions in the Indian Army.

Restructuring the Indian Army – Taking the War into Tibet?

Dolam Stand-Off: Where do we stand?